Space: the final frontier. At least that’s what James T. Kirk called it. For me, wrapping my head around epic space simulator Elite Dangerous has been a personal frontier for going on six years since it’s launch in 2014.

Created by the aptly named Frontier Developments – headed by David Braben, co-creator of the 1984 original “Elite” – Elite Dangerous is a game with scale quite simply beyond anything else on the market.

At its core, Elite Dangerous is a self-proclaimed massively multiplayer space flight simulator that throws you into the pilot seat or “helm” if we’re being massive nerds (spoilers: we are) of a variety of ships ranging from small fighters to large passenger liners and tells you to travel the stars. And there’s a lot of them, 400 billion star systems to be precise. You see, Elite isn’t just simulating space flight physics, it’s simulating the entire Milky Way galaxy 1:1, it’s simultaneously amazing and existentially terrifying.

The game starts with a basic tutorial to get you to grips with how an entry-level Sidewinder spaceship controls, provides some brief details about the core mechanics that you’ll need to understand before you start your career out in the void and that’s about it, you’re on your own. I have attempted this process three times. Three times I have gotten through the tutorial, been plonked into a huge rotating space station in the middle of absolutely nowhere, and then said “Now what?”

The answer to that question and possibly Elite’s strongest appeal or biggest deterrent is completely up to you. You could visit the Mission Board and pick up a fairly standard set of fetch quests to drop off a few tons of materials to a neighbouring system, you could try your luck hunting down criminals or set off as a plucky space explorer ready to map out the galaxy.

“Space isn’t easy, it is actively trying to kill you”

Whatever you chose to do first you’re probably going to: die or run out of fuel. This is a hard game. Not only because there are almost as many keybindings as there are star systems but because the game simply doesn’t tell you what to do when starting out. It’s taken three attempts to understand why everyone that’s been playing it for six years has stuck around but now I finally “get it”.

Elite Dangerous has been described as “A mile wide and an inch deep” countless times since it came along, even to the point where the developers recently acknowledged it. But Elite isn’t about constructed story missions or hand-holding game design, it’s a galaxy for you to explore, to make your own story.

I personally decided to become an asteroid miner. Now that I’ve got a Valve Index to go along with my HOTAS joystick and throttle setup (I told you, massive nerds) I’ve been experiencing huge asteroid belts that span for miles in terrifying scale thanks to VR. Blasting classic rock playlists while my mining lasers scorch the surface of these giant, rotating rocks that my ship is warning me I’m far too close to. The cheery hum of my collector limpet drones flying to and from my cargo hold clutching chunks of space gold.

However, alongside being a freight transporter or bounty hunter, asteroid mining is a fairly standard career path compared to the more adventurous “Commanders” out there.

For example: Due to how common it is to run out of fuel, there exists an entire community of volunteers who call themselves “Fuel Rats” who you can reach out to, explain which system you’re stuck in and they’ll send someone out to you, free of charge, to fill your tank up and see you on your way (Not without giving you a friendly, role-playing lecture on fuel management first, of course).

This is why I don’t think “A mile wide and an inch deep” is necessarily a negative description. Elite gives you the platform and the tools to do what you want within its galaxy-spanning boundaries. The already teased “Odyssey” expansion (coming 2021) promises more tools for the space sandbox, adding the much-awaited “space legs” feature allowing Commanders to get up from the helm and explore millions of planets on foot, finally expanding on the lunar rover style exploration that the “Horizons” expansion introduced in 2015 with planetary landings.

This affords the game an entirely new dimension, players will be strolling around the interiors of space stations, landing to conduct missions from planetary bases, and exploring low atmosphere worlds to scan bio-data of alien plants or salvaging wrecks to sell for credits. There are also hints of ground-based combat with an array of weapons.

“Elite Dangerous is a mile wide but it’s as deep as you want it to be.”

To say I’m excited to have even more reasons to sit with a VR headset strapped to my face for hours on end is an understatement. Elite is the perfect game for a sci-fi nerd like me, its scale is unrivalled and in virtual reality even more terrifyingly overwhelming than its “flatscreen” mode. Supercruising (the game’s version of warp speed) to within a few kilometres of a gigantic, raging Red Giant in VR is a humbling experience even after doing it for 100 hours. For me, it really is the scale of everything in the game that makes it so special and keeps me coming back.

The game has been further enhanced by having a squadron of friends who are equally or even deeper into the game than me, “Winging” up and completing combat missions together, capturing a sector of space for whatever faction we’re siding with today, or simply just floating around asteroids and chatting – through the game’s audio filter that adds immersive cracks and beeps – while we all beam a rainbow of lasers into rocks and defend each other from wily space pirates. Elite Dangerous is a mile wide but it’s as deep as you want it to be.

Space isn’t easy, it is actively trying to kill you so it makes sense that a space flight simulator is so difficult to master. It requires patience and persistence to get the most out of the game, something that took me at least 60 hours to grasp but I’m thankful I did. It’s admittedly a big commitment that won’t be for everyone but for fellow sci-fi fans it’s absolutely worth a try… or three. 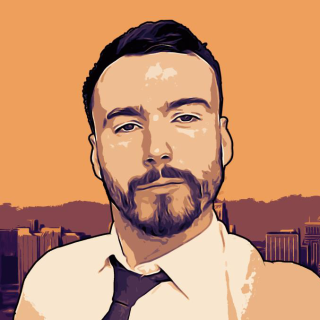 Steve James or "RiotBananas" is a livestreaming content creator producing a variety of content on Twitch.TV as a Partnered streamer.